Hauntings of the Past

It might not be Halloween, but it’s about to get spooky on 107.7 The Bronc.  Join Kaleigh Muhs on a chilling adventure as she presents Hauntings of The Past, our first-ever student produced audio and video podcast. Hauntings of the Past takes a deep dive into ghostly folklore and haunted locations all across New Jersey.

In this radio show and podcast, Kaleigh and her guests takes haunted tales from different locations in the state, shares their spooky stories and analyze these supernatural occurrences to get a better understanding of their place in New Jersey lore and history for both herself, her listeners and viewers.

Hauntings of the Past debuts Friday, December 9 at 8 p.m. on 107.7 The Bronc WRRC-FM, your favorite podcasting platform and YouTube. 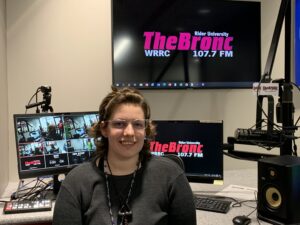 Kayleigh Muhs is Radio/Podcasting major here at Rider University and is becoming a big part of 107.7 The Bronc. In addition to hosting the Bronc Buzz, Kaleigh is also hard at work creating The Bronc’s first-ever audio/video podcast. Haunting of the Past debuts later this fall.Kaleigh is also a student worker for the facilities department at Rider. In her spare time, she likes to listen to music, and practice piano. She also takes writing prompts she finds on Pinterest and writes a story around it. Quite handy, Kaleigh is Most of Kaleigh’s friends live in Tennessee and texts them almost every day to stay connected. 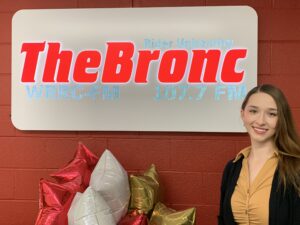 Rebecca Zawodniak ’23
Co-host
zawodniakr@rider.edu
Rebecca Zawodniak is a graphic design student at Rider University. Originally from historic Bucks County in Pennsylvania, she grew up hearing about local mythical legends and nearby hauntings. Rebecca’s appreciation for art and storytelling reinforces her interest in the world of the paranormal. She aims to be respectful and open-minded when discussing otherworldly topics, but she occasionally plays devil’s advocate to try and fill in the blanks.
Subscribe to hear every episode of Hauntings of the Past!
Did you miss an episode of Hauntings of the Past? That’s okay, hit the links below and listen on your favorite podcasting platform.