The Old Maid & The Thief 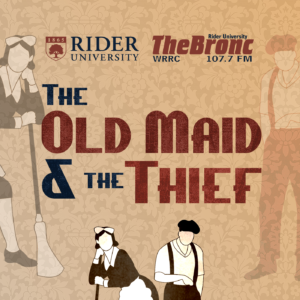 Written and composed by Gian Carlo Menotti, The Old Maid & The Thief is a story about Miss Todd and Laetitia who believe that their guest, Bob, is an escaped thief from a nearby prison. They want to get rid of him, but don’t know how without endangering themselves, so the pair concoct a scheme to leave money out for Bob to steal, believing Bob will eventually take the money and run.

After a week, Laetitia declares that Bob has taken all the money, but hasn’t tried to leave. In the meantime, Laetitia learns something about herself, and that what she really desires to go away with Bob and begin to live life before she grows old.

Download The Old Maid & The Thief on your favorite platform
Click below to hear Rider’s first-ever, station producer, podcast opera: